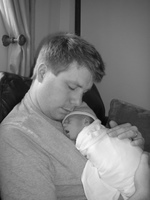 It has been rather a busy few weeks for us! As I’ve mentioned in a previous post, my wife Ness and I were expecting our first child in mid July.

However, on the 12th of June, 2008, William Anthony Richard Godbolt was born. He was a few weeks early and weighed only 1.88kg (4lb 2oz), but he breathed unassisted straight away and has been feeding brilliantly. He’s already nearly 2kg, and shows no sign of stopping!

We’d like to thank all our family and friends for their help, well wishes and lent and donated baby things. William’s early arrival was such a surprise for us we were caught somewhat off-guard — so especial thanks to our parents and siblings for buying up half of Mothercare on our behalf!

William gets some early coding in.

Ness and I are absolutely over the moon, and are enjoying every moment we are spending getting to know our new son! More pictures here.