The runtime performance of Rust for a simple path tracer

In my last article I described my port of smallpt to Rust.

In this short post I’m updating with some performance figures. I’m really impressed; the Rust version really is as good as the C++ version! I tested on my home server, a 4-core 2.5GHz X3323, which was otherwise idle.

Due to some stack limitations in Rust, the Rust code bails out after 500 levels of recursion; so I modified smallpt to do the same.

And then I ran the rust code with:

The two output images are similar enough that I’m pretty sure I’m running them with equivalent settings: 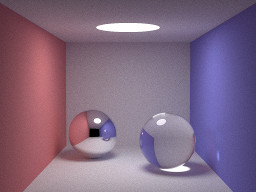 The output of the Rust version. 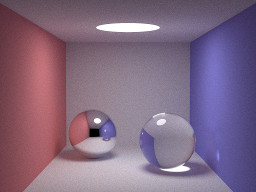 The output of the C++ version.

Pretty impressive: the Rust version is actually a tiny bit faster that the C++ version. I double-checked that both the Rust and C++ version use all the CPUs on the machine too. If anything, the C++ compiler settings I used are more generous than those the LLVM backend is using for Rust!

I plan on hacking more on the tracer, but I know myself too well to promise anything. I’ve had a bunch of suggestions for zindex (which I must blog about very soon), Seasocks and of course GCC Explorer and I will probably spend some time on them. But you can’t really beat the awesome feedback of working on a renderer!