As I’ve mentioned previously, I’m currently on a break between jobs. With my copious spare time I decided – rather late in the day – to head to C++Now, a C++ Conference held yearly in Aspen, Colorado. Several C++ folks had recommended that I come to it: it’s a smaller and more intimate conference than CppCon.

I was not disappointed! Firstly, Aspen is a beautiful place to hold a conference, although the thin air at 9,000 feet up takes a bit of getting used to. 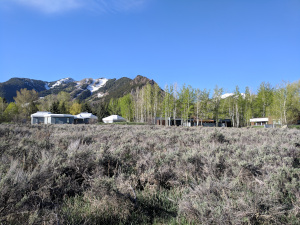 The conference rooms used for C++Now nestle in a beautiful meadow.

After deciding to go, I thought it would be odd to attend a conference and not speak. Of course, submissions for talks had closed months earlier, but thankfully the conference has lightning talk sessions. I love these kinds of things, and so prepared a 5-minute talk: “Trip Report: 7 years in finance with C++”. I submitted the idea on the Thursday before the conference. To my surprise, one of the organisers – the amazing Jon Kalb – contacted me the next day to ask a favour. One of the scheduled presenters had dropped out: could I possibly fill in? With the over-confidence of someone who doesn’t do this enough to know better, I said yes! My talk was to be on Tuesday, so I had to cobble something together pretty quickly!

Aspen has a small airport but many people fly in to Denver and drive the remaining 4 hours. I’m blessed that Jason Turner (of C++ Weekly and CppCast fame) lives in Denver and offered to let me stay the night before (and the night of my return). I’m even more lucky that Charley Bay offered to drive me to Aspen…and also to let me share his room! As all the rooms were booked, this was a life-saver. Thank you so much Charley!

Sunday night was conference registration and a reception. It was great to meet so many great people. The conference is smaller than others I’ve been too: around 150 attendees. By the end of the week I knew pretty much everyone by name, which is a refreshing change from the anonymity of some larger conferences.

The sessions started early and finished late, with plenty of social activities in between. Most sessions were 90 minutes long: it seems a long time, but the small nature of the rooms and the informal setting lend themselves to a very interactive presentation style. That meant that even the best-planned talk would take a fair bit longer answer questions as the talk progressed. I love this style!

Here’s a list of all the talks I saw, along with a short description of them. Bash films has recorded them all, so they’ll be available on the C++Now YouTube channel once they’re postproduced.

The notes above don’t do the conference justice. So much of the cool stuff happens during the breaks, or at dinners or lunches. I met some amazing people, and was inspired to read up on about 12 new papers, and to investigate more libraries. A special thanks to Michael Caisse for inviting me to dinner and giving me a great opportunity to speak with many of the boost developers. And again, huge thanks to Jason Turner for the pre- and post-conference accomodation and airport taxi service, Jon Kalb for giving me the opportunity to talk, and of course Charley Bay for letting me car-share and room-share with him.

Matt Godbolt is a C++ developer working in Chicago in the finance industry.